Clovis Maillet is a historian and artist. He is the author of an EHESS thesis on medieval hagiographic kinship under the direction of Jean-Claude Schmitt (La parenté hagiographique XIIIe-XVe s., 2014) and a specialist in questions of gender and kinship in medieval visual and clerical culture. His book Les Genres Fluides, de Jeanne d’arc aux saintes trans was published in 2020, Un Moyen âge émancipateur (with Thomas Golsenne) in December 2021. With Louise Hervé, he has been performing, installing and making films since the early 2000s, and has published Strange Attraction (2012), Spectacles without objects (2014) and L’Iguane (2017).

In search of Eugen.i.e of Rome, saint and trans

“I am searching for a third-century Christian who was beheaded and buried in the underground catacombs of Rome. Their gender changed over the course of her life, as did their name. Their companions were eunuchs, a third gender that no longer exists today. From Rome, Croatia, Catalonia and Burgundy, the cult of Eugenie spread and was gradually forgotten. Perhaps because the gender fluidity characteristic of early Christianity coincided more and more poorly with the norms of a world now ruled by men of power rather than radicals, young girls refusing marriage, and trans people.” 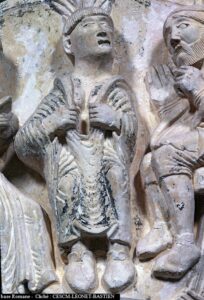 The trial of Eugen.i.e on a capital of the Madeleine of Vézelay, 12th century.