Behind the scenes of TextWork: Benoît Maire as told by Caterina Riva

English (no translation)
Free, reservation compulsory at this link.
Please consider cancelling your Eventbrite booking if you no longer wish to attend, so that we can offer the opportunity for others to attend the event.

Within the framework of their partnership, the Villa Medici and TextWork have entrusted to the Italian author and curator Caterina Riva the production of a text dedicated to the work of artist Benoît Maire, currently a resident of the French Academy in Rome (2021–2022 year-group). This monographic study will be published in the summer of 2022 in French and English and will enrich the TextWork corpus, contributing to opening up spaces of dialogue and discussion on art in France.

A public airing of the work in progress is proposed on 10 February at Villa Medici, through a round-table talk with Benoît Maire and Caterina Riva, in the presence of another artist-author duo: French artist Pauline Curnier Jardin, resident at the Villa Medici in 2019–2020, and Ana Teixeira Pinto, author of the TextWork dedicated to the latter’s work and published in 2018. The talk, moderated by the TextWork committee, will afford the opportunity to reflect on the collaborative process towards the creation of the monographic texts and their extension beyond the writing phase. The participants will share their experience and the follow-up from their encounter within the framework of the Textwork x Villa Medici programme.

The French Academy in Rome – Villa Medici, a multidisciplinary art centre and artists’ residency, has been supporting creation in all its forms for over 350 years, with an approach that is open to the most contemporary expressions. Sharing a focus on today’s artistic production and the question of its dissemination, the Villa Medici and TextWork hope to join forces to support the visibility of French authors and artists internationally.

The editorial platform TextWork and the French Academy in Rome – Villa Medici have formed a partnership for the project of a commissioned essay that explores the work of a contemporary artist in residency in Rome. This collaboration will give rise to the publication of the monographic text and an open public talk with the artist and the author.


Biography of the speakers

Benoît Maire, born in Pessac (France) in 1978, is a visual artist currently in residence as a fellow of the Académie de France à Rome – Villa Médicis. After studying philosophy, Benoît Maire obtained his National Higher Diploma in Visual Expression (DNSEP) at Villa Arson in Nice before carrying out a research residency at the Pavillon du Palais de Tokyo. The research project he is working on at Villa Medici is entitled “La main en peinture et le papier imprimé” (The Hand in Painting and Printed Paper). It consists of producing a series of works in different mediums (photographs, paintings, texts and sculptures) which together will form an investigation of the transition from the iconic hand of Italian primitivism to the fleshly hand of the Renaissance.

Caterina Riva is a curator and the Director of MACTE Museo di Arte Contemporanea di Termoli, on the Adriatic coast of Italy. In 2007 she co-founded in London the project space FormContent with Francesco Pedraglio and Pieternel Vermoortel and co-run it until 2011. Riva was Director of Artspace in Auckland, New Zealand (2011–14) and Curator at the Institute of Contemporary Arts Singapore (2017–2019). Riva cherishes working with artists and recently she has been writing on how the digital is altering artistic production as well as our lives. 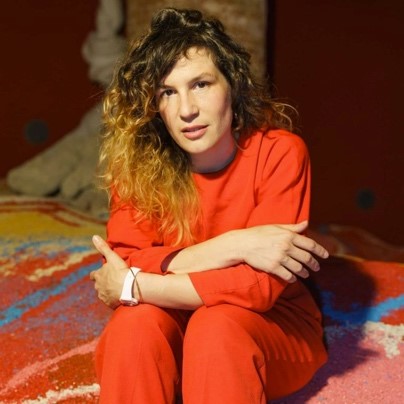 Pauline Curnier Jardin, born in 1980, Marseille (France), is a Berlin-Rome based artist working across installation, performance, film and drawing. In 2015-2016 she completed a residency at the Rijksakademie, Amsterdam. Curnier Jardin is the winner of the 2019 Preis der Nationalgalerie and recipient of the 2019/2020 Villa Medici Residency in Rome and the 2021 Villa Romana Fellows in Florence. She was the laureate of the Prix Fondation d’entreprise Ricard (2017) and winner of the Dutch prize NN Award (2018). She was tutor at the Dutch Art Institute and teacher at Kunsthochschule Kassel, and tutor at De Ateliers in Amsterdam.

Ana Teixeira Pinto is a writer and cultural theorist based in Berlin. She is a guest professor at Academy of Fine Arts Nuremberg (AdBK) and a theory tutor at the Dutch Art Institute. Her writings have appeared in publications such as Third Text, Afterall, e-flux journal, Manifesta Journal and Texte zur Kunst. She is the editor of a forthcoming book series on the antipolitical turn to be published by Sternberg Press. Together with Kader Attia and Anselm Franke, she is organizing the conference and podcast series The White West: Whose Universal, taking place at HKW Berlin, and she is a member of the 2022 Berlin Biennial artistic team.

In order to access the event and in compliance with the regulations in effect, participants are asked to present their valid green pass, accompanied by an identity document, and to wear a FFP2 mask for the duration of the event.