Published by the Académie de France à Rome-Villa Médicis, Studiolo is an annual art history journal dedicated to art creation and circulation of images between Italy, Europe and the World, from the Renaissance to the present day. The journal welcomes inedited research, founded on innovative methods, which deals with all the disciplines of art history. Each issue includes a thematic dossier as well as various sections: essais, which is open to off-theme proposals, débats, dedicated to historiographic issues, patrimoine et histoire à la Villa Médicis, which looks into the history and patrimony of the Académie de France à Rome, as well as the activities and conservation programs undertaken by the History of Art Department. Finally, in the champ libre section, Studiolo welcomes proposals from the current year’s residents at Villa Medici. 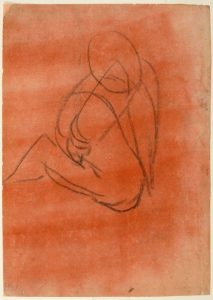 What is the part of indeterminacy in an artwork? How can we consider it without disavowing it or bringing it back precisely to its contrary: determination?

Studiolo’s 18th issue questions, on one hand, what goes beyond artistic intent and could be considered the liveliest and most moving part of an artwork. On the other hand, the critical reception and epistemic paths that art historians have taken to consider indeterminacy.

The paradigm of a rhetorical image capable of telling a story, making an idea explicit, becoming a subject, appears very early in the history of representation and in the determination of its functions. This goes along with a very particular approach to the image: the one of a viewer (worshipper, collector, museum visitor, etc.) who tries to discern content and style, who seeks to understand and to classify the image according to notions of genres and/or function, for example.

In this relationship involving the artist, the artwork and the viewer, indeterminacy can be thought of as a “residue left unexpressed by a defective articulation” which escapes the registers of traditional discourse and the principles of iconography (G. Cassegrain).

Attempts to comprehend the modalities of an artwork’s expression, in order to reconfigure them in an articulated discourse, tend to conceive the work as a whole. It appears thus as a grammar where each element is overdetermined by an internal logic, such as that of subject/meaning. However, with their equivocal, ambiguous, ambivalent, obscure and strange natures, the works that we study often thwart this logic, by constituting themselves through indeterminations that may challenge the very act of nomination and with it the discipline of history of art (Didi-Huberman). When studying the history of reception, one realizes how many divergent interpretations are given to the same object and how the history of seeing is not univocal.

In Subject as Aporia in Early Modern Art, Alexander Nagel and Lorenzo Pericolo significantly drew attention on the indeterminant character of Early Modern works of art, and on aporia as a problem in art when new subjects, new formats, genres, techniques and venues for the display of art emerged. The intelligibility of artworks is then constantly challenged in favor of an unprecedented valorization of other intrinsic qualities of artistic works, such as ingenuity, genius, strength, fury, virtuosity, nonchalance… (N. Suthor).

Thought in terms of “impasse” or of “perplexity”, which stimulate questioning, the indeterminacy typical in aporia concerns the artworks just as much as the processes of interpretation that in many ways it defies: by the lack of attributes, the paradoxes of figurative spaces, the ambiguity of objects, characters, movements and affects represented, or the pictorial rendering, which prevents the eye from clearly discerning form in shadows, or in blurred and flat painting areas for instance. One could consider the enigmatic environment in the Views of Ideal Cities conceived by the Quattrocento masters; the poetic brevitas of Venetian painters, such as Giorgione; the semantic opacity of frames and margins in Mannerist decorations, which enhance surprise and wonder; the indeterminacy of certain figures, which, depending on context, can be described as spiritelli, amorini or putti ; or all those categories, such as that of “heads”, which are strictly speaking based on the uncertainty of an identity.

But indeterminacy is not only a question of subjects, which supposedly are determined by the artist’s will. One might actually wonder to what extent the work is not ultimately the result of indeterminacy, impasses, imponderables, indecisions, missed gestures, a non-finito, as well as premeditation, choices and thoughts. For Paul Klee, drawing is nothing more than a line that wanders: the mark of a movement, far from any declaration of intention[1]. While Marcel Duchamp defined “as a coefficient of art” the “arithmetic relationship between ‘that which is unexpressed but projected’ and ‘that which is expressed unintentionally’ “[2]; doesn’t unconsciousness also have its part in the creative process (J. Koering) ?

It is important then to take into consideration artistic practice, and its meandering, by observing artistic processes and the empirical dimension of creative experience, which feeds on cultivated abandonment, certain forms of idleness that can reach the point of making a working method of chance (S. Troche).

Long before the twentieth century, the indeterminacy of stained walls, the inchoate nature of clouds or the random configurations of marble veins, attracted the attention of artists and came to embody, as potential images, paradigms for art creation (D. Gamboni). In fact, art creation was never embarrassed by undetermined marks, stains, drippings that disturb the artist’s figurative work; on the contrary, these “accidents” are capable of surfacing the living crucible of the workshop. These discreet, unstable and random signs or phenomena, which exist beyond language, convey the “scenario of the image’s production” (A. Chastel), with its accidents and the heuristic potential of the material environment.

By looking into indeterminacy, Studiolo’s next issue of does not wish so much to call for papers that intend to resolve this ‘problem’, but rather to welcome proposals that identify these indeterminacies, reporting on their effects, on the new relationships they engage and on the methodological rearrangements they impose. The phenomena that we do not understand are indeed often the most fruitful from a methodological and theoretical point of view.

This will give the opportunity to question also the meaning of the implementation of Western paradigms of knowledge, based on the notions of objectivity and detached observation (L. Daston, P. Galison), in order to rethink the role of criticism and historical discipline in the light of the artwork’s network of dissonances, and thus welcome the question of the “outside”: considered as what escapes definition, and is open to other forms of knowledge (D. Haraway).

Within this changing of perspective, Studiolo’s 18th issue will welcome papers on the indeterminacy of gender and/or species, which share the path opened by queer and anti-speciesism studies, questioning the historical and cultural constructions of norms and categories that determine different views and perceptions. These new methods are fruitful not only to rethink the relationships between genders (male/female) and categories (human and animal, human and plant, living and non-living), but also to consider the hybrid and porous character of many artistic productions, which are unclassifiable by value scales, knowledge structures, norms and categories established by societies and cultural institutions, and which, for this reason, may have had both a marginal place as well as a precursory role.

Reproduced works must be provided by the authors and free of rights.

Authors will be responsible for formatting their article according to editorial standards (available on the Académie de France à Rome website www.villamedici.it).

The article must be accompanied by an abstract of approximately 800 signs and a biography of the author of 800 signs. The author must also mention his functions, current research and recent publications, and an e-mail address. This abstract and biography will be sent in a separate document.

All these documents must be sent by e-mail, in Word format, to Patrizia Celli, editorial secretary: [email protected]