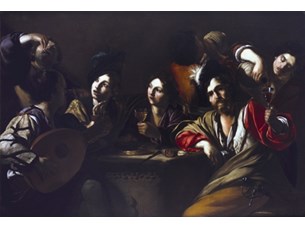 The French Academy in Rome – Villa Medici presents the exhibition The Baroque Underworld. Vice and Destitution in Rome , in the Grandes Galeriesfrom 7 October 2014 to 18 January 2015 (opening on Monday 6 October 2014, from 6.30 p.m to 8.30 p.m). Curators are Francesca Cappelletti, professor of history of modern art at the University of Ferrara and Annick Lemoine, officer in charge of the Art history Department at the French Academy in Rome, lecturer at the University of Rennes 2. The exhibition has been conceived and organized within the framework of a collaboration between the French Academy in Rome – Villa Medici and the Petit Palais , Musée des Beaux-Arts de la Ville de Paris, where it will be shown from 24 February to 24 May 2015. The Baroque Underworld reveals the insolent dark side of Baroque Rome , its slums, taverns, places of perdition. An “upside down Rome”, tormented by vice, destitution, all sorts of excesses that underlie an amazing artistic production, all of which left their mark of paradoxes and inventions destined to subvert the established order. This is the first exhibition to present this neglected aspect of artistic creation at the time of Caravaggio and Claude Lorrain’s Roman period, unveiling the clandestine face of the Papacy’s capital, which was both sumptuous and virtuosic, as well as the dark side of the artists who lived there. Seicento Rome was the most lively cultural center of Europe, with a vibrant avant-garde which attracted artists from all over Europe. Many were the Italians, French, Dutch, Flemish, and Spanish who settled and made their careers in the Capital of art. In contact with this “splendid and miserable city”, as Pasolini called, they gambled with the visual codes and standards of beauty, measuring themselves against the universe of slums and  dangers of nightlife, the Carnival and its licentiousness. This milieu which was both burlesque and poetic, vulgar and violent, became, for some, a central theme, and for others, an experience of life. The exhibition features over fifty works of art created in Rome during the first half of the XVII th century by artists from all over Europe, including Claude Lorrain, Valentin de Boulogne , Jan Miel , Sébastien Bourdon , Leonaert Bramer , Bartolomeo Manfredi , Jusepe de Ribera , or Pieter van Laer . In the Grandes Galeries, the public will discover the works of the greatest Caravaggesque painters, the major Italianate landscape artists and the Bamboccianti , painters of thebambocciate, who heralded the representation of ordinary life in Rome and the surrounding countryside. Paintings, drawings, prints from major European museums, as well as works from private collections, rarely exhibited to the public.
Opening hours: Tuesday to Sunday (closed on Mondays) 10:00 a.m. to 7:00 p.m. (last admission 6:30 p.m.).
Exhibition tours : On Tuesday, Wednesday, Friday, Saturday and Sunday, at 5:00 p.m. (in French) and at 5:45 p.m. (in Italian).
Tickets for the exhibition and guided tours of Villa Medici and its gardens : € 12 (full price) | €  6 (reduced price *)
Free entrance for the exhibition on Thursday from 5.00 p.m. to 7.00 p.m. (last admission 6:30 p.m.). Exhibition organized with: