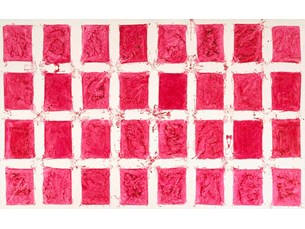 From 12 February to 11 May 2014 (opening 11 February 6.30 p.m.-8.30 p.m.) Villa Medici is presenting the first important Italian retrospective dedicated to Simon Hantaï , curated by Éric de Chassey. This exhibition has been devised and realized six years after the artist’s death in cooperation with the Centre Pompidou , following the exhibition presented there from 22 May to 2 September 2013, which was curated by Dominique Fourcade, Isabelle Monod Fontaine and Alfred Pacquement, former Director of the Musée National d’Art Moderne – Centre de Création Industrielle. Forty various sized paintings realized between 1958 and 2004 will be displayed in the Grandes Galeries of Villa Medici. The exhibition is divided into two sections linked by a selection of small paintings that helps understanding the artist’s itinerary in the 1960s and 1970s. In the first part , surrounding the monumental achievements of Peinture (Écriture rose) and À Galla Placidia (1958-1959), are paintings created by small strokes or calligraphy, as well as works realized with the pliage technique, such as the first Mariales which constitute Hantaï’s answer to the work of Matisse and Pollock. The second section of the exhibition contains the Tabulas series, realized from 1974 to 1982, prior to the Laissées (1981-1994). Following his participation in the 1982 Venice Biennale, Hantaï decided to retire from the art world opposing a radical provocation, in the works of his last years, by cutting or even destroying previous pictures. The exhibition terminates with the works from the Pliages à usage domestique series, many of which have never been shown to the public before. Here, the artist revisits some of his youthful intuitions, especially those he had at the beginning of the 1950s, which reveal his bond to Marcel Duchamp’s artistic research. The retrospective is further enhanced by the presentation of the great Mariale conserved in the Vatican Museums, which was not exhibited at the Centre Pompidou and is part of the a great series developed by Hantaï between 1960 and 1962. Simon Hantaï was born in Hungary in 1922. He attended the Academy of Fine Arts in Budapest. After a one-year sojourn in Italy, he moved to France in 1948 where he encountered André Breton. Close to the Surrealist movement, Hantaï drifted away to develop his personal abstract style. Simon Hantaï is known as the master of ‘folding as method [pliage comme method]. He represented France at the Venice Biennale in 1982. The Centre Georges Pompidou in Paris dedicated two retrospectives to the artist in 1976 and 2013. Important collection of his works are hold by the Centre Pompidou and the Musée d’Art Moderne de la Ville de Paris. Exhibition presented in collaboration with:            With the support of:

The catalogue of the exhibition is published by Drago (in Italian and French).