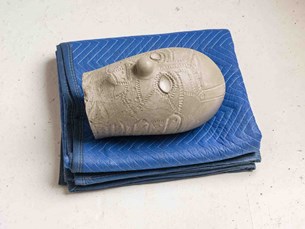 From 30 April to 13 September 2015 (opening the Wednesday 29 April 2015 6:30 pm) the French Academy in Rome – Villa Medici presents the exhibition Jean-Luc Moulène. Il était une fois , dedicated to one of the major figures on the international contemporary artistic scene. The works of Jean-Luc Moulène – objects, photographs, films – express both a permanent reflection on the condition of the artist in society, a radical criticism of the manipulations and seduction of representation as well as a formal research often tinged with humor and derision. Curated by Éric de Chassey, this exhibition focuses on recent works, created by the artist for this occasion, as well as earlier projects that offer an overview of his work. Jean-Luc Moulène. Il était une fois represents the third and last step of an itinerary that began with the Disjonctions exhibition, organized at the Center of Contemporary Art Transpalette in Bourges, curated by Damien Sausset in the summer of 2014, and continued with Documents & Opus (1985-2014) at the Kunstverein Hannover, under the direction of Kathleen Rahn. Each exhibition is dedicated to different aspects of Moulène’s production, ranging from photography to sculpture, from drawing to painting, not forgetting his posters, brochures and other publications. Jean-Luc Moulène. Il était une fois was prepared by repeated visits at Villa Medici that allowed the artist to immerge himself in the spirit of this setting and react to it. The idea of this monographic exhibition was conceived in 2010, and since then he has often resided at Villa Medici, a place that he already knew well, having participated in two collective exhibitions there: La Mémoire in 1999 and La Fabrique de l’image in 2004. This exhibition presents an apparently heterogeneous selection of over thirty works that will enable the public to grasp some of the artist’s distinctive characteristics: his use of the objet trouvé or the “given situation” as seized through a photographic principle (what Moulène calls “documents”) or processed and elaborated according to the principles of drawing (which he calls “opus”); an approach to reality that does not reduce art to mere communication or narrative, but rather proposes a presentation of images; a way of conceiving his own works both as a thought experience as well as an experience of emotions, beyond their apparent formal diversity. The exhibition opens with one of the oldest images of the artist, Bubu 1 er (1977), a primitivist drawing, here correlated to a large two-faced object realized with moulding and assembly, Janus (2014), and a photograph, Manuel Joseph , portraying the poet with whom the artist had collaborated for the exhibition at Villa Medici in 2004. These works make the presence of the body an explicit aspect of Moulène’s work, while the rest of the exhibition treats this theme more implicitly. The theme of a body producing objects or the body blending in with objects is also present in the series Tronches (2014), consisting of fifteen objects modeled in cement from carnival masks and placed on colorful covers, or the Tricolore (2015), made with blown glass objects compressed by a steel structure. Numerous works on display revisit history – that of the artist or of the venue – and this is one of the meanings suggested by the title, Il était une fois “Once upon a Time”. Some works evoke architectural or decorative elements in Villa Medici, such as the monochrome patinas that Moulène has chosen for two exhibition rooms and that recall – without being a faithful copy – the way Balthus applied color in the 1960s, when he was director of the French Academy in Rome. Or again, the film Les Trois Grâces , shown in the Salon de musique, which recalls one of the main bas-reliefs of the Villa’s façade. Jean-Luc Moulène Born in Reims in 1955, Jean-Luc Moulène lives and works in Paris. He began his professional itinerary as a photographer, achieving recognition with the series Objets de grève (1999-2000) and 48 Palestinian Products (2002-2005); from the end of the 1990s he has also devoted himself to the production of objects and drawings. He participated in Documenta X (1997), the Saõ Paulo Biennial (2002), the Venice Biennale (2003), the Taipei Biennial (2004), the Sharjah Biennial (2010). Among the cultural institutions which have dedicated exhibitions to his work are: the Centre d’art contemporain in Geneva (2003), the Contemporary Art Center in Kitakyushu (2004), the Louvre Museum in Paris (2005), the Culturgest in Lisbon (2007), the Carré d’art – Musée d’art contemporain in Nîmes (2009), Dia:Beacon in New York (2011) and Modern Art Oxford (2012). In 2011 he created two huge objects, Body and Body Versus Twizy , produced by Renault. His works are part of the most important public and private art collections, such as the Centre Pompidou or Dia:Beacon. He is currently participating in the Slip of the Tongue collective exhibition in Punta della Dogana, Venice, curated by Danh Vo. Jean-Luc Moulène is represented by the Galerie Chantal Crousel (Paris), Galerie Pietro Sparta (Chagny), Thomas Dane Gallery (London) Galerie Greta Meert (Brussels), Miguel Abreu Gallery (New York), Galeria Désiré Saint Phalle (Mexico). Free Admission Exhibition opening time : from Tuesday to Sunday (closed on Mondays) 10:00 a.m.-7:00 p.m. (last entrance at 6:30 p.m.) The salon de musique, with the film Les Trois Grâces , will be exceptionally closed to the public on October 11 .