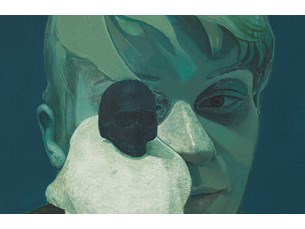 The solo exhibition of Victor Man entitled In un altro aprile, is programmed at Villa Medici from 26 June to 1 September 2013 (opening: 25th June 6.30 pm – 8.30 pm). This is the last step of the series of three exhibitions curated by Alessandro Rabottini focusing on the theme Academy. The work of Victor Man explores the history of painting and representation conceived as a place where memory , fiction and amnesia are stratified, a place dense with shadows and mysterious atmospheres, where things exist in a state of perpetual motion. The exhibition at Villa Medici presents a series of recent paintings as well as works – never shown before – which Victor Man had realized during a two-month sojourn at Villa Medici. Indeed, the installations realized by the artist consist of single works that mutually interact in a dialogue : seen together they suggest the possibility of multiple narrations while not establishing univocal meanings or paths. Victor Man (born 1974 in Cluj, Romania) who lives and works in Berlin, has had solo exhibitions in prestigious international institutions such as the Mudam (Musée d’Art Moderne Grand-Duc Jean) in Luxemburg, the Centre international d’art et du paysage Ile de Vassivière, the Boijmans Van Beuningen Museum, Rotterdam, the Hayward Gallery in London, the Ikon Gallery, Birmingham and the GAMeC in Bergamo. He represented Romania at the 2007 Venice Biennale and participated in collective exhibitions at the Contemporary Art Center of Vilnius, the Arnolfini Gallery in Bristol, the Kestnergesellschaft in Hannover, the Kunstverein in Hamburg, the Palais de Tokyo in Paris and the ModernArt Museum in San Francisco. Admission and opening times Opening: 25th June 6.30 pm – 8.30 pm